skip to main | skip to sidebar

It's been another hectic week, but also a productive one. Last Friday ( and yesterday ) I trailered the Nat's horses over to Malibu Dude Ranch to school them. ( Four more weeks and we'll be in Kentucky! ) We got in a very good Mounted Shooting practice, had several other horses and people in attendance. Last Friday was also farrier day, got back from Malibu and stayed down at barn for a few hours until John had finished up. Saturday we finished up getting in the second cutting at Michele's, Sunday I went on a hay run and then did stuff around the house. Monday I left the ranch early to go on a dentistry call, then we tried out Jim's new truck, took the white trailer to pick up a new training horse. ( a lovely young TB filly that will be at RO-NO for a few months training ) The only drawback- the wiring on the white trailer is shot- Rob, Jim and Jeff have been working on it every day- totally re-doing the wiring. Wednesday, in addition to regular chores and training, I had a 'to-do' list that was a mile long- and I did get to most of it. Yesterday I left early with horses, off to school at Malibu and do some of their herds teeth. This morning I'm off to pick up a round bale for the brood mares and yearlings, then off on a sawdust run. Then Lori and Tappy will be arriving ( yeah! ) Saturday I'll head to LAQH to see some of the Western Double Point NPHA Show, then will run do a quick errand or two in Honesdale, then back to the Ranch to work with Alaina and Jose.

Sunday Rob and I will get all of the haying equipment parked together and tarped. We leave early Monday morning to the hospital- Rob's surgery to repair/replace his torn ACL is early- he'll be laid up for quite awhile recovering from this surgery :( Not looking forward to it, but at least eventually his knee should be good again.

I know I've been lacking in my posts on the blog. For those of you who facebook, please go on my RO-NO Ranch page, I tend to be on there much more, and have lots of updates and pics.


www.ro-noranch.com
Posted by nola at rono ranch at 6:08 AM No comments: 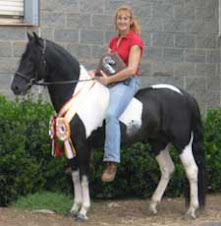 nola at rono ranch
Waymart, Pennsylvania, United States
'It's never boring!' is a phrase often quoted here at the ranch- and it's true. My hopes for this blog is to help our many friends and clients keep a finger on the pulse of the comings, goings, and adventures here at ro-no. For those new to ro-no- we are a horse training facility that has slowly morphed into a breeding farm, boarding stable, lesson barn and more. We have English and Western horses, and most importantly ( at least to me) our gaited Paso Fino Horses. We ride, we work, we play, and we ride some more ( which is our work and play!) We have a friendly atmosphere and we enjoy meeting new faces- both equine and human. If you are on this blog, you most likely have been on our web site too- if not I hope you take the time to check it out. Happy Trails!